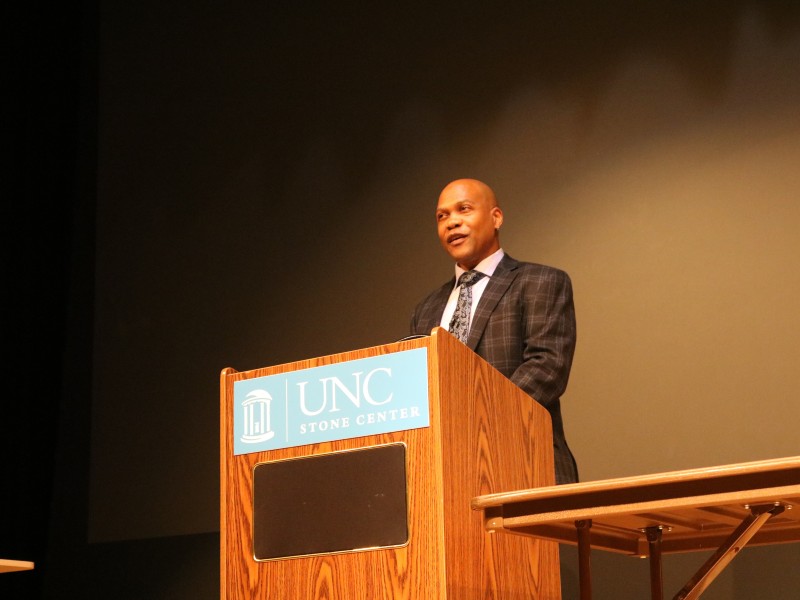 Patrick Johnson ’89, ‘91 (M.A.) is a North Carolina native and has dedicated his life to sharing the untold stories of LGBTQ individuals in the South.

He is an award-winning author of eight books, including two oral history collections: Sweet Tea and Black. Queer. Southern. Women. He is a seasoned stage performer, with a series dramatizing his written works. Currently, he is the Carlos Montezuma Professor of African American Studies and Performance Studies, as well as the chair of African American Studies, at Northwestern University.

During high school in Hickory, North Carolina, Johnson became a huge fan of Carolina basketball and knew then that he wanted to go to Chapel Hill for his higher education. “I didn’t apply to any other school, even though my high school guidance counselor told me they didn’t think I would get in,” Johnson said. “I proved them wrong.”

Johnson thrived at Carolina, and it made an indelible mark on him. He met some of his closest friends and mentors — people with whom he remains in touch and continues to call collaborators. While an undergraduate, he participated in the Black Student Movement, Ebony Readers Onyx Theater and the gospel choir. He stayed in the choir through graduate school and credits it for helping him navigate college as a minority. It gave him a place to go to spend time with others who shared his passion for music and gave him the opportunity to travel around the state and meet people from all walks of life.

Carolina shaped Johnson as a student, as well as his adult perspective, by introducing him to people from all over the state and world. He learned how to interact with people who were quite different from himself — both in life experiences and beliefs. He saw the significance of going from a small town where you know everyone and share the same background to being around people who know nothing about you and whom you know nothing about. “My Carolina peers opened my world and my eyes to other ways of doing things, which helped me to break out of my own shell and come into my own,” Johnson said.

Two notable pieces of Johnson’s bibliography include his oral history collections. His first book, Sweet Tea: Black Gay Men of the South – An Oral History, is a collection of stories of black gay Southern men and brought voice to a group of marginalized people. Using this book, Johnson developed a stage performance based on a selection of stories.

His most recent book, Black. Queer. Southern. Women. is another work in which Johnson seeks to provide a voice for marginalized communities. Currently on a reading tour, one of his stops included the Sonja Haynes Stone Center for Black Culture and History at Carolina in February. These oral histories and their accompanying performances give a space and a voice to stories that may not otherwise be shared in the mainstream.

Johnson is a member of the Carolina Pride Alum Network. He is exhilarated that this network exists as a resource for current students and Carolina alumni. He is excited to see the network grow and, with it, CPAN’s capacity to help current students.