Skip to main content
Home / Story of Us / Passing the baton 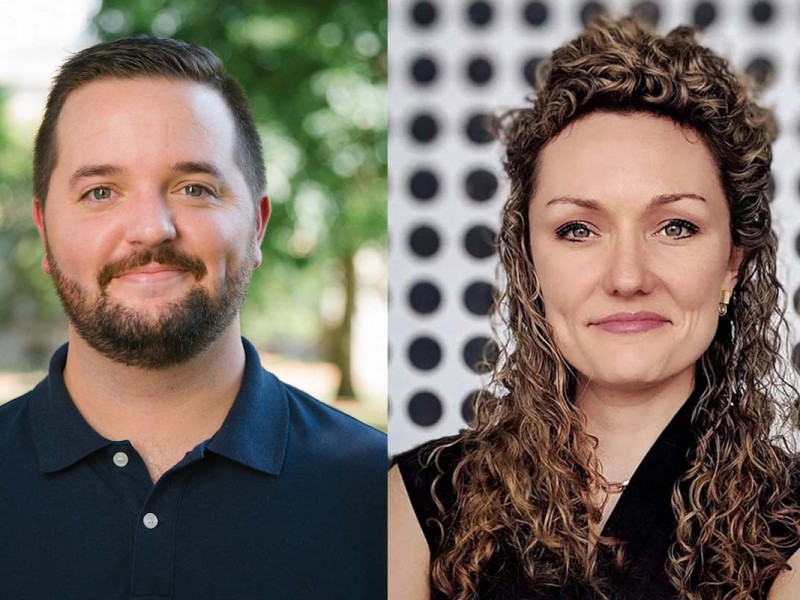 The Carolina Pride Alum Network (CPAN), created in 2016, seeks to foster community among LGBTQ+ alum, faculty, staff and students. Our purpose is to institutionalize engagement that serves our membership, progress for our community, and the University of North Carolina at Chapel Hill. As CPAN president, individuals take on key roles in advancing our goals and engaging our fellow LGBTQ+ alumni. As we pass the baton, we invite you to learn more about our former and current presidents, Mackenzie Thomas and Hogan Medlin. Mackenzie Thomas graduated Phi Beta Kappa from Carolina in 2013 with a B.A. in economics and minors in scientific entrepreneurship and business administration and is a member of the Order of the Golden Fleece. Mackenzie helped found and was the second president of CPAN (2019-21), a group that now consists of 1300+ alumni members. She’s served on the boards of UNC’s Campus Y (Center for Social Justice) and Young Alumni Network, and on the Corporate Advisory for the National Gay & Lesbian Chamber of Commerce. 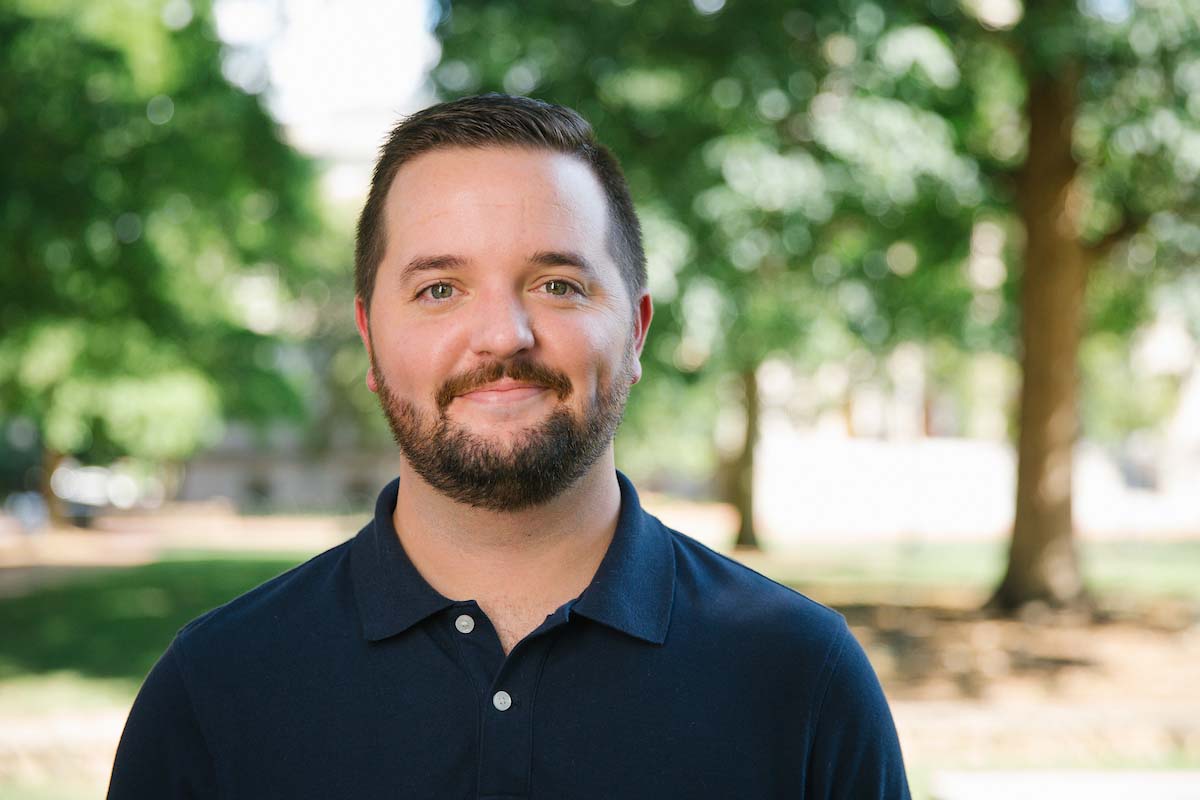 Hogan Medlin graduated from UNC in 2011 with a B.A. in political science and is pursuing his master’s in public administration while working full-time. He is a Morehead-Cain and Fulbright Scholar (South Korea) and was student body president his senior year. Hogan was also a UNC Clef Hanger and volunteered with the Campus Y’s Big Buddy program. He currently serves as a system manager for change management at UNC Health, where he works to further unify North Carolina’s public health system. Hogan is the third president of the Carolina Pride Alum Network and was part of the original founding board in 2017.

As Mackenzie ends her term and Hogan Medlin begins his term as president, we wanted to reflect on the past and look to the future. We asked Mackenzie and Hogan a few questions about CPAN and their presidencies — and here’s what they had to say.

Q: What are your thoughts about the creation of CPAN?

Mackenzie: The creation of CPAN was in many ways a reflection of the times — both what was happening in 2016 with HB2 but also the past 50, 60, 70 years. As queer folks, we are often in search of our community, of safe havens that encourage us to be our truest selves even when other spaces in the world want to push that away. For many decades, on campus and as alumni, UNC folks built spaces of friendship and accountability — sometimes over social events for alumni in New York City and Raleigh, and other times for advocacy for critical things like gender inclusive housing. We created CPAN for community and advocacy — to ensure that we have a consistent and omnipresent voice on campus and that we show up for one another when it matters. Sometimes that means in protest and other times in fun.

Hogan: I think many of us had similar thoughts at the beginning of CPAN’s creation: It was long overdue that an alumni organization for LGBTQ+ people existed at UNC-Chapel Hill, AND we’ve got to do this “right” from the beginning so it lasts in perpetuity (and grows). Not only does representation matter when it comes to providing marginalized communities space to see and interact with one another, but CPAN is also vital for younger people, current and prospective students to see that Carolina is a place where people like them can be and thrive. Having the University formally endorse CPAN as an official alumni organization — well, to me, that’s incredibly powerful.

Q: What is something that occurred during your presidency that you are most proud of?

Mackenzie: A couple quick things come to mind: Back in April, the CPAN National Board came together to issue a statement of support for our trans community and in strong opposition of three proposed pieces of legislation in the North Carolina legislature. The founding of CPAN in 2016 was a reflection of our collective opportunity to stand together and build a more equitable university and state, especially for our queer community. Though this statement and encouragement of action is one moment, it’s an acknowledgment of the power and privilege that we have and must use. On a different note, over the past few years we’ve established strong relationships with campus organizations and departments including University Admissions. CPAN has called hundreds of admitted students who requested a conversation from a member of the LGBTQ+ community. I have to think that we’ve assuaged some fears and brought some queer excitement to some new Tar Heels!

Also, I’m also really proud of the current students who are unabashed in their willingness to stand for what’s right — a special shout-out to current student body president Lamar Richards whose courage has made all of us better.

Q: Could you provide some information about the speaker series that was canceled because of COVID-19?

Mackenzie: Simply, the speaker series was created to celebrate LGBTQ+ alumni and offer a deeper discourse on the influence and state of the LGBTQ+ community in three areas: 1) media/arts, 2) the state of North Carolina, and 3) sports. We’re excited to come together early next year and build an even more diverse and exciting swath of folks to have good, honest conversation together.

Q: What do you hope to accomplish during your presidency?

Hogan: Our organization is at a pivotal point facing renewed challenges like many new organizations emerging from the pandemic: What do we want to be long-term, and how can CPAN best serve the thousands of Carolina queer alumni, as well as the campus, more broadly? Those questions have always been the board’s main focus, and now that we are in our third year, I hope we can begin to really take root in answering those questions that support the longevity of CPAN in service of our members and the larger LGBTQ+ community. Additionally, I hope we see growth in our membership by engaging our network and campus post-pandemic.

Q: What was your reason/inspiration behind your decision to serve as president of CPAN? How will your background in student-government serve you in this position?

Hogan: Having been a part of the founding board, I’ve been inspired by both of our previous presidents, Ken Smith (who is really the founder!) and Mackenzie Thomas. Both led CPAN to early success, and their different approaches gave voice to the many diverse members within our community in designing CPAN’s purpose. I hope to fill their very, very big shoes.

In terms of how leading student government might be parallel to this experience, I’d have to think it isn’t really — CPAN is still new, still establishing itself, whereas student government has been around since nearly the beginning of the University’s existence. I hope my professional experiences in organizational change management, leading people and teams through change, will be more relevant for me to draw on in this role as president. That said, I imagine my fierce passion and loyalty for Carolina that propelled me to run for student body president can certainly be useful leading CPAN as well!

Meet the rest of your new CPAN board members

Ivan serves as executive director of the National Conference for Community & Justice of the Piedmont Triad. Founded in 1937, the organization “fights bias, bigotry and racism in all their forms,” by working with students, educators and companies primarily in North Carolina. Ivan has been the recipient of the Triad Business Journal’s “Forty Leaders Under 40 Award” and the Greensboro Chamber of Commerce’s “Change Agent Award.” Ivan, from Greensboro, North Carolina, also serves on the board of Equality NC and has chaired the Board of the North Carolina Center for Nonprofits.

Jaci has worked in various operational roles for UNC Athletics for the last 22 years and currently as director of the Eddie Smith Field House. She brings extensive experience from an important part of the University. From Raleigh, North Carolina, she is also on the UNC Diversity & Inclusion Awards Committee and an active member of the Carolina Black Caucus. Previously, she worked with the Atlanta Organizing Committee of the 1996 Olympic Games and was an assistant general manager for Georgia Pride. She is a past board member of the LGBT Center of Raleigh and past board president of the Crape Myrtle Festival, a North Carolina-based charity that has raised funds for HIV/AIDS services and other LGBTQ causes for 38 years.

Cierra, of Durham, North Carolina, is the executive director and publisher at Scalawag, a nonprofit journalism organization focused on the South. She has 15 years of fundraising experience that includes leading development efforts for the Washington, D.C., region of Teach for America and for her alma mater, the North Carolina School of Science and Mathematics. She also serves as a coach for programs associated with the Facebook Journalism Project and participates in the UNC-Knight Table Stakes program at the UNC Hussman School of Journalism and Media.

B. Scott is a television personality, radio show host and internet celebrity who identifies as gay and gender nonconforming. B. Scott’s extensive Wikipedia profile can be found here. They graduated from UNC-Chapel Hill in 2002 and lives in Los Angeles, where they continue to operate a high-profile blog on entertainment news and pop culture.

Rebecca, from Bucks County, Pennsylvania, recently retired from Janssen Pharmaceuticals, a subsidiary of Johnson & Johnson, the latter being where she spent most of her career. Over 32 years, Rebecca held positions of increasing responsibility in communications, public relations, public affairs and marketing. She holds a J.D. from Harvard Law School and has served on the Board of Directors of the Human Rights Campaign, which included three years as co-chair of the board. She also led the launch of the HRC Board Emeritus Council.